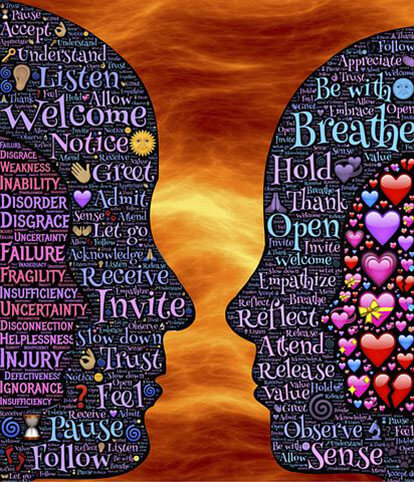 Relating to others is one of the most fundamental experiences that define what it is to be human.  Like eating, drinking, and finding safety, connecting with those around us is not only a defining experience, but an unavoidable, essential ingredient to survival and growth. We are deeply programmed to be dependent—both joyfully and painfully—on human connection. And not just in some vague, psychological sense, but biologically, in a manner that reaches across the various systems of our body.

Understanding the biological/physiological need for human connection can give us a better idea of how to care for ourselves and our partners and demystify our partner’s (and our own) irrational behavior (and how it comes stems from our experiences growing up) just enough to help us remain compassionate and curious during times of stress.  While we remember to take care of our muscles, skin, etc., most people do not realize that like our other organs, the functioning of our brain is very much affected by our lifestyle—and more specifically, by the frequency and quality of our contact with others.

To understand why this is the case is to understand a bit about how the brain develops.  As infants, our brains are filled with possibilities (or to be more scientific, with an overabundance of neurons and synapses). This moment is unique because which specific neuronal pathways will later be used by the adult brain has not yet been determined. The eliminating, strengthening, and creating of neural connections depends not only on genetics, but also on experience. Like a sculptor working with stone, our experiences work to “carve out” developing neural connections that will determine the structure of our brains.

So what does this have to do with relationships? There are two answers. The first is that, of the experiences mentioned above, our early experiences of love and connection have a particularly powerful impact on how our minds develop because we are predisposed to prioritize relationships because of their evolutionary impact on our survival. The second is that the manner in which our minds develop in turn impact how we relate to others as adults.  Many of these important early interpersonal experiences that shape the brain are the early bonds, usually with our mothers or fathers, that many refer to as attachments or attachment relationships.

Attachment theory proposes that an infant’s early experiences with its caretaker(s) have a powerful effect on how that individual will function as an adult, particularly in the interpersonal arena (Schore, 2001).  First proposed by John Bowlby (1969), attachment theory was so named because it focuses on the quality of attachment, or emotional bond, between infant and caregiver.  Bowlby suggested that this bond is formed through physical contact and affection, as well as the parent’s ability to sensitively attend to the child’s needs for physical care and emotional soothing.  He further proposed that when the caregiver’s responses are in tune with the infant’s needs, the infants develop certain expectancies as to how they will be treated by others.  These expectancies have a long-lasting effect on how others are experienced and perceived.  In this way, the quality of a person’s early attachments has an impact on his or her later relationships.

Once proposed, Bowlby’s theory was supported by the striking findings of researchers such as Harlow (1973), whose wire monkey studies demonstrated that the drive for contact can be stronger than the need for physical sustenance. Additionally, Ainsworth’s strange situation experiments highlighted varying types of attachment styles (Ainsworth, Blehar, Waters, & Wall, 1978).  These styles are most frequently referred to as secure, anxious/ambivalent, and avoidant.

This type of memory is also at play with insecurely attached children.  While children with insecure attachments also hold mental representations of their parents, in this case the representations are neither positive nor soothing.  In the case of child abuse, they may even be terrifying, increasing the child’s sense of vulnerability in the world.  Regardless of the quality of the attachment relationship, the common theme is that early experiences with caretakers will be internalized as schema or models.  These models, or “internal working models of attachment,” are used to allow the brain to summarize past experiences in a way that biases present cognition and leads to more rapid analysis of ongoing perception.  Through implicit memory, the brain anticipates (whether for the good or for the bad) what is likely to happen next and what to expect from relationships.

It is through these processes of eliminating, strengthening, or creating neural connections that the interpersonal interactions between infant and caretaker impact the developing brain.  Though the plasticity of the infant brain is to some extent maintained through adulthood, the impact that experiences, especially interpersonal experiences, have on the infant brain is much more fundamental and foundational than what occurs later in life.  If deprived of the experience of emotional connection with a caretaker, the infant’s brain can fail to develop basic capacities, such as the regulation of emotion and the ability to be attuned to others or trust others.

To understand the impact of emotional deprivation, it is useful to compare it to the case of visual deprivation.  If one eye of a non-human primate is sutured shut after birth, the subsequent lack of visual stimulus reaching the thalamus and visual neocortex will cause the deprived eye to become functionally disconnected from these areas (Joseph, 1978).  Once the suture is removed, the eye, though normal, will be unable to relay information and therefore seem “blind.”  Similarly, if the limbic system is deprived of critical experiences, the individual can experience an emotional and social “blindness” that can limit his or her capacity to perceive, process, or respond to emotional or social stimulation (Joseph, 1998).

So what critical experiences are necessary for proper limbic development?  In essence, the infant (and child) needs to engage in collaborative interactions in which he or she “feels felt” by the caregiver.  In these interactions, the caregiver, whether sharing in the child’s joy or soothing his or her pain, is sensitive to the child’s state and can therefore give what he or she needs.

These types of positive experiences with the caretaker (or lack thereof) have a particularly strong impact on the developing right hemisphere, which is primarily responsible for stress-coping responses, the regulation and communication of emotion, and the development of identity (Schore, 2002).  Early attachment experiences have a unique impact on the right versus left side of the brain because the right hemisphere is dominant, or developing more actively, during the first two years of life.  During this time, the right hemisphere is dependent upon attachment experiences in order to mature properly, and is particularly vulnerable to the two dominant forms of infant trauma—abuse and neglect.

Because the household environment can be consistent throughout childhood, ‘relational’ or ‘attachment trauma’ is typically chronic.  This is problematic, for while acute stress produced reversible deficits in brain functioning, chronic stress is associated with long-term patterns of dysfunction, in this case in the right hemisphere (McEwen, 2001).  Because the right hemisphere is deeply connected to the autonomic, arousal, and limbic systems, early relational trauma causes deficits in these areas in a manner that leads to dysfunction in three major domains: self-regulation, social attunement, and the formation of a meaningful identity (Schore, 2002).

Though few people seem to have had the ideal parents and some reports show only 1/3 of us are securely attached, much of the recent literature shows that therapy, as well as related techniques such as mindfulness, can change the brain, even at this core schematic and relational level. Understanding how these patterns developed in the first place can help us understand how to heal them—through repetitively receiving what we did not get as a child so we can learn something new.  It also helps us be more compassionate with ourselves and our partners in the meantime because these patterns take a long time to change and are not our fault.  Deep Eddy Psychotherapy specializes in group therapy, a particularly powerful way to learn new relationship expectations, instincts, and skills.